We are pleased to announce the publication today of Volume 13 of the Correspondence of James K. Polk. This penultimate volume in the series, covering August 1847 to March 1848, sheds new light on the end of the Mexican-American War and the origin of the current U.S.-Mexico border. Letters discuss the war’s final battles and the Treaty of Guadalupe Hidalgo, which ceded California and the Southwest from Mexico to the United States. 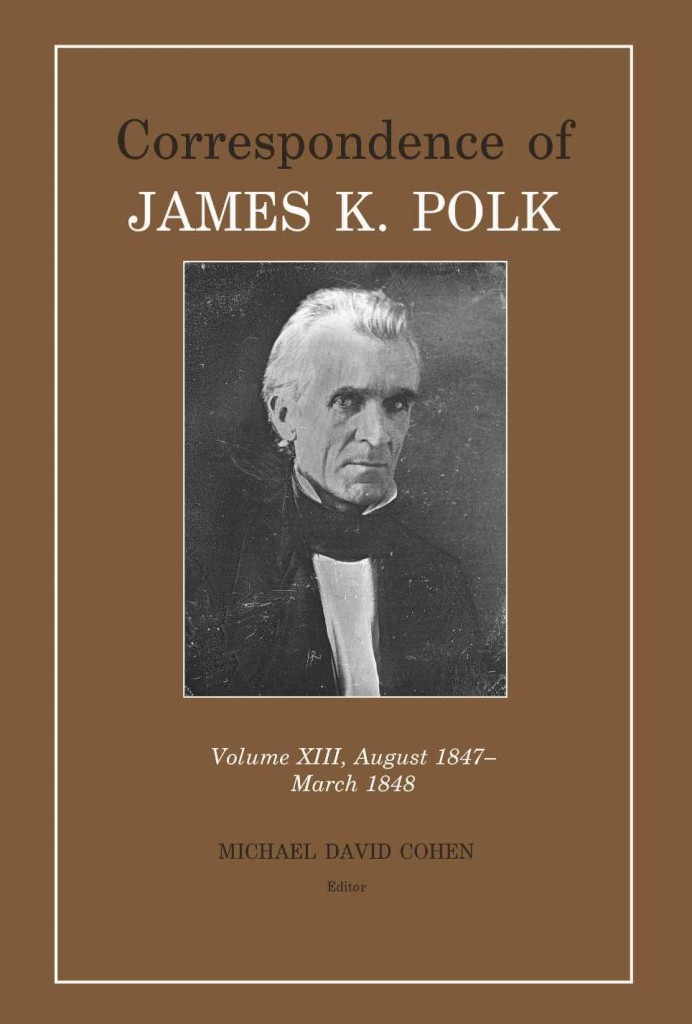 Polk, a former Tennessee governor and congressman, served as the eleventh U.S. president, 1845 to 1849. During his term the United States, by winning the Mexican-American War and by setting the northwestern boundary with Canada, increased in geographical size by one-third. Mexico lost half its territory.

The new volume also features letters on persecuted Mormons’ journey from Illinois to Utah, U.S. interest in annexing Cuba, and Americans’ reactions to the revolutions that shook Europe in 1848.

The twelve previous volumes are available in print from the University of Tennessee Press and online, at no charge, from Newfound Press.

The Correspondence of James K. Polk publishes the thousands of letters that Polk wrote and received. The most important and interesting letters are printed in full, with footnotes identifying all people and events. The rest are summarized.

“The volumes are crucial resources for scholars and students researching America before the Civil War,” Cohen said. “They offer a glimpse into war, politics, diplomacy, economics, society, and culture in antebellum America.”

The volume also highlights other notable moments during that era. Lawyer Aaron Palmer advocates enhanced trade with Russia and China. Medical student William Gamble expounds on the evils of slavery. Federal worker Barbara Hume, writing when few women worked for pay, stresses the need of employment to support her children. Dakota Indians warn of the suffering and starvation caused by the government’s withholding food and money promised in a treaty.

The Polk letters, gathered from the Library of Congress and other repositories, illuminate the personal life and business affairs of one of the most private men ever to occupy the presidency. Some deal with Polk’s purchases and sales of slaves and the attempt by one enslaved man to escape from the president’s cotton plantation.

One volume remains to complete the series. The project is supported by grants from the National Historical Publications and Records Commission, the National Endowment for the Humanities, and the Tennessee Historical Commission.