James K. Polk and His Time

A Conference Finale to the Polk Project 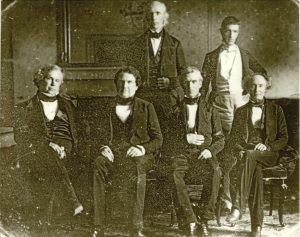 Polk, War, and the Army

“Young Hickory” Goes to War: Polk’s Approach to and Conduct of the Presidency in Wartime

“The Whigs Generally are Obliged to be more Covert in their Thwarting Schemes”: The Federalist Party’s Shadow in the Era of Polk

A Polk Man to the Core: John Fulton Reynolds, the Politics of Westward Expansion, and the Professionalization of the U.S. Army Junior Officer Corps in the Antebellum United States

William V. Scott, The University of Texas at San Antonio

Young Polk and Other Polks

Young Hickory, the Little Giant, and the Democratic Party in the Age of Manifest Destiny

Give ’em Jessie! Jessie Benton Frémont and the Presidential Campaign of 1856

Indians Nations, Slavery and Congressional Power in the Post–Civil War and Antebellum Period: Reconsidering the Impact of the Thirteenth Amendment and Its Influence on Congress and Tribal Governments

“Religion is the Very Best Possession in the World, and the Last to be Spoken Of”: James K. Polk and Jacksonian Religion as Enlightened Rational Christianity

Arresting Achievements of the Overshadowed: The Perilous Reemergence of

Polk and the Business of Slavery

Polk as a War President

Rachel A. Shelden, University of Oklahoma

A signing of Dr. Greenberg’s book Lady First will follow the address.

Dinner on Your Own

Names followed by * indicate participants who have worked at the Polk Project.